Coffee and a Haircut 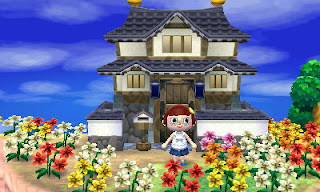 Today was a pretty big day for the town. Though it was also big on a somewhat more personal level, as the exterior of my house is finally finished. It took a long time before I finally found all the relevant materials at Nook's Homes, but it's done, and it I think it looks great. Once I manage to push through my plans for the rest of the town, I think the mayoral mansion (as some of the residents have come to describe it, due to its size) will act as a wonderful centerpiece to the town's feel. 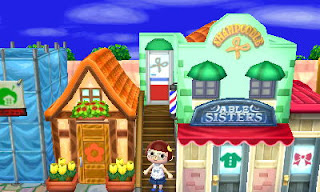 On my door, I found a flier. It was an advertisement for the new salon that had opened on Main Street. It seems that the construction above The Able Sisters' was finally complete. I had been itching for a haircut for a long time, so I decided to go check it out as soon as possible. Sure enough, while a tarp now covered T&T Mart, the one surrounding The Able Sisters' had come down to reveal the upstairs had been entirely remodeled, and now sported the name "Shampoodle". 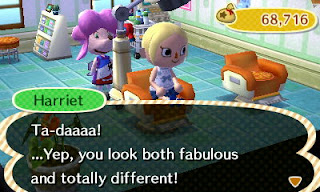 The salon was run by a stylist named Harriet, who had been attracted to the town's rapid growth when she heard that no salons or barbers were in the city. She was quite friendly, and asked a lot of questions to try and get the perfect haircut for me. Color treatment was even included in the price.

When she was done, I felt a lot more like my old self. I'm never dying my hair brown again, or going with such a cut-and-dry style. It had been serviceable, but just didn't seem to fit who I was. I was glad to have such an amazing stylist in town, and from the reactions of the other villagers, I wasn't alone. 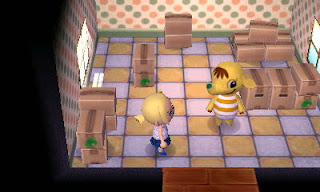 Feeling confident about my new look, I decided to drop by and introduce myself to the town's newest resident, Eloise the elephant. She was busy unpacking, having just arrived this morning, so I was quick about things. I had other things to do today myself, after all.

I didn't spend much time with her, but she seemed pleasant enough, if a little frazzled by the hassle of moving. I was glad someone had moved in so quickly after Sylvia's departure, as it had left me feeling a bit worried, despite my best efforts to stay positive. 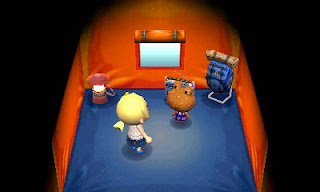 We also had another visitor to the campsite today. I didn't have a whole lot of time on my hands, but I felt obligated to drop in and say hello. His name was Wart Jr., and he was simply in time to do a bit of camping. I was a little disappointed that the campsite didn't seem to be drawing in any new permanent residents, but at least the campers who had good experiences were going back out into the world with good things to say about our town. And there was still a long time for the investment to pay off. 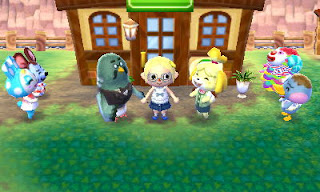 A bit pressed for time after so much happening in the morning, I rushed back to Town Hall to collect Isabelle, as we had an opening ceremony to attend. The café was done, and its proud new keeper, Brewster the pigeon, was eager to get to work.

Like most of our ceremonies, the event was short and sweet, though it was surprisingly crowded. A lot of people seemed eager for a good cup of coffee and a new, relaxing place to hang out. 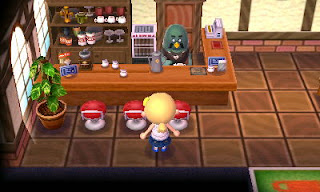 Brewster isn't exactly what you'd call talkative, but he's a man who knows his coffee beans. I've never really cared for coffee before, but I had also never tasted anything quite like what he brewed up for me. It was complex and full of flavor, a far cry from the tasteless mass produced coffee I had experienced back home. I think with Brewster in town, he may just turn me into a real coffee junkie. And it's hard for me to complain too much about that, because there are often times when I feel like I could use the caffeine boost. The cup I had easily kept me going for the rest of the day.
Posted by Mayor Sakura at 6:23 PM