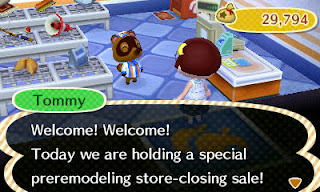 Well, it's June now, and you can really feel the shifting of the seasons. The weather was dry for the first time in what felt like weeks today. I actually got some use out of the watering can Isabelle had given me to help out around town!

My plans for work didn't start until the afternoon, so I decided to look around the shopping district for a bit in the morning. Much to my surprise, Tommy at T&T Mart told me they'd be closing the next day in order to remodel and expand the shop again. The town had become so lively in recent weeks that they had already outgrown their new store. Their current building simply couldn't keep up with the demands of the growing town. I have to admit, hearing that made me kind of proud of all the work I had been putting into the town. 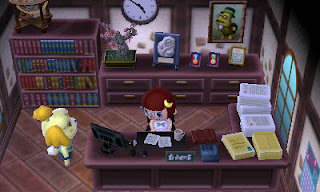 When my shopping for the day was done, I headed to Town Hall to talk with Isabelle. After her day off, she was eager for us to get back to work. I'm actually starting to understand why she loves her job so much. Even though I never asked for it, I'm starting to love my own just as much. I've never really felt this kind of sense of accomplishment before.

I had promised Blathers that we'd work on that café project as soon as we were able, and I intended to do just that. He had already dropped off the needed paperwork, which Isabelle had been going over earlier this morning. She had already filed all the relevant permits and such. All that was left was for us to pick a spot and raise the funds. 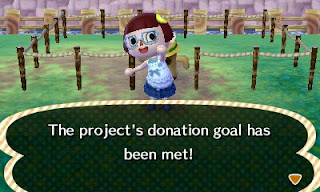 I decided the best place for a café would be directly next to the train station. This way, visitors simply waiting at the station for a new train would have easy access to it, and it would be an easy stop for anyone headed to Main Street for some shopping.

The fund raising was easily the quickest on record. Everyone in town was excited for the idea of a coffee house. The oldest residents had really missed it when the place had shut down, and were eager to get it back, even if it meant funding a bit of the construction themselves. The news that the project had been a smashing success definitely made Blathers happy when I told him about it. 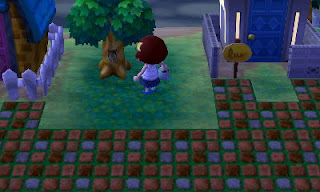 The end of the rainy season is definitely having some impact on the local wildlife. New insects are starting to show up, including tons of cicadas. I've even found a lot of their empty casings left on trees. While I haven't done any fishing, some of the villagers have even told me that different fish are starting to become more prominent in the rivers and along the shore, attracted to the slowly warming waters.

The seasons are changing, and the town along with them. It's kind of refreshing, despite the heat.
Posted by Mayor Sakura at 6:55 PM