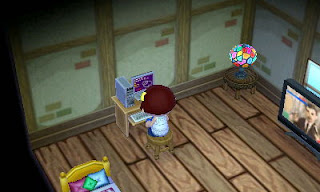 Well, today was nice and relaxing. It being Sunday, Joan was in town, but I decided to forgo the stalk market for the foreseeable future. While it can certainly prove a great way of making money if you're a mixture of smart and lucky, I think I prefer more hands-on (and less risky) methods of earning bells.

I recently managed to find and buy myself a computer, so I spend most of the morning surfing the internet and playing a couple of games. Not exactly the most exciting thing to talk about, but I hadn't gotten to do these kinds of things since leaving home, so it proved an amazing way of passing the time, and helped me reconnect with some of my online friends. 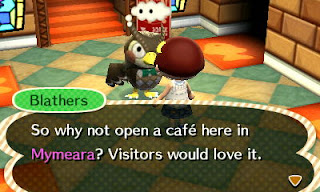 When I got the computer, I had passed my contact information around to most of the people in town, figuring it would be better than sticking notes to my front door. My play session was cut short by Blathers, who wanted to discuss something in person as soon as I had time. Since all I was doing was killing time to begin with, I decided to go see what he wanted right away.

It seems that one of Blathers' best friends, Brewster, used to run a café here in town, but had to close down when the population grew too small to support it. Now that the town was picking up pace again, he wanted to move back, but his old location wasn't available anymore. Blathers insisted that the town would benefit a lot from having another social hangout, and I couldn't really argue. The club was nice, but not everyone was up late or liked the loud music. And who didn't need a good cup of coffee now and then? I promised him we'd get to work on the project soon, but I had given Isabelle the day off, so it would have to wait until at least tomorrow before we could really start work on anything. 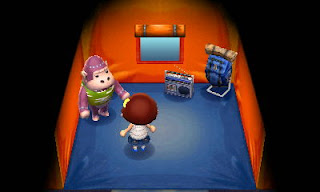 On my way home from the museum, I was informed that we had a guest visiting the campsite, so I decided to drop in and say hello. It felt like a surprisingly long time since it had last been used. Our temporary resident was Violent, a gorilla from a city who's name I couldn't pronounce if I tried. She was simply here on vacation, with no plans on moving in, which I find doesn't bother me much--the lady was kind of full of herself from what I could tell during our brief chat. Still, she was a guest, and would be spending money while she stayed, so I wished her a pleasant time, and made my leave.
Posted by Mayor Sakura at 6:59 PM