A Museum That Belongs In One 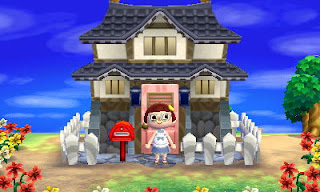 Well, i woke up this morning to some major changes. My house, from the outside at least, now looks completely different. While I'm still waiting for Nook to stock items to help finish off the look, it's a major step int he right direction. As the house has grown, it's actually turned into somewhat of a mayoral mansion. When Nook had a renovation option inspired by ancient Japanese castle architecture, I couldn't resist. I've slowly been gaining a mental picture of my ideas for the town, and my own home would act as something of a starting point to spring the theme forward. I simply have to get access to the kind of plans and materials needed for the rest of work, which I imagine is going to take a while. 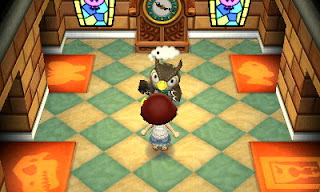 I had been visiting the museum daily since my run-in with Redd, both to check on the museum's progress, and for my art lessons with Blathers. When I arrived today, I found Blathers deep in thought. It seems that the museum was coming along well, and it was making Blathers itchy to expand its operations. It actually had an unused second floor, but it had been closed off for so long that it was a sorry state of disrepair, and would take far more money than he had available to fix it up for use. One thing we both agreed on: the museum was a public service. It both attracted visitors to the town, and was something of a cultural landmark. I was willing to do whatever it took to help the museum in its educational endeavors. We decided our best option would be to have the city fund it like many of the other city improvement projects we'd been working on. Blathers would file the paperwork with Isabelle, while I would handle the donation drive. 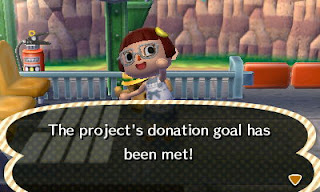 Blathers works pretty fast when he's awake. After checking the shops on Main Street, I headed into the office, to find he had already been there. Isabelle was pretty excited for the work, as things had been kind of slow lately. We quickly set up the donation drive at the train station, and got to work. We gathered the money remarkably fast, as even visitors were donating, looking forward to seeing the museum improved and having more reason to explore the town. I personally donated the last bells we needed to reach our goal.

I really can't wait until the renovations on the museum are complete. Blathers was even looking into bringing back a former employee who had been laid off during the museum's turn for the worse. The town as a whole was really starting to shape up, and it feels amazing to be at the center of this.
Posted by Mayor Sakura at 3:24 PM