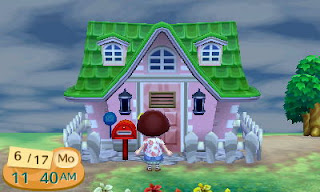 Well, my house is looking a lot better this morning. It's not nearly as lop-sided as it was before. I'm kind of glad Nook's crew works so fast. Sadly, I'm still expanding the house faster than I can fill it. Many of the rooms are still empty. Hopefully I can find some furniture I like in the coming days, as the empty house can actually be kind of depressing. I ordered some renovations from Nook today, which should be complete in the morning. I hope they look as nice as they seemed in the showroom.

We have another new resident, a deer named Lopez. He's a friendly, sociable sort, who set up his house right near the town square so he would be close to all the action in the town. I hope we can become good friends. While I'm not really interested in guys, Lopez is pretty cute, and fun to be around. I actually found myself chatting with him a lot more than the other new residents. We seemed to have a lot in common. 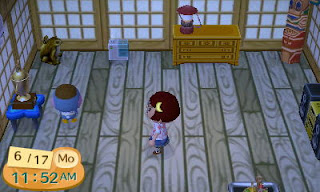 Pate wanted to visit my house today, to see how I was coming along. I was kind of embarrassed to show her just how much of my space was going unused. While she was very polite about the whole ordeal, there was no real getting around the fact that some rooms were entirely empty, and even the ones that had things had little, most of it a mishmash of whatever I had been finding that seemed useful or interesting. She did have an interesting tip for me, though, completely unrelated to interior design--Redd, a traveling art dealer, was in town. 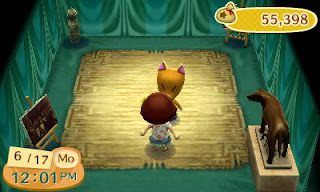 Redd was instantly kind of suspicious. His tent had a shoddily painted logo on it, which seemed a ripoff of the leaf logo used by the Nook family. He talked a bit too fast, as if hoping to overwhelming me with information. Actual information was in short supply. He seemed to know very little about the actual pieces he was trying to sell. Blathers had warned me about shady art dealers before--I now think he was referring specifically to Redd. I was tempted to go get Blathers and ask his opinions on the pieces for sale, but at this time of day, he would be sound asleep, and I doubted Redd would let the poor owl within a hundred yards of him. Still, this shady fox seemed my only real hope of getting artwork to support the museum. A few of the pieces were obviously fake. On one of the paintings, the paint still has a moist sheen, as if it hadn't finished drying yet, and the odd statue in the back seemed to be made of brand new rock. The only one that really seemed trustworthy at all was the statue of the wolf tending the two human children. I decided to buy it, and hoped Blathers could confirm its authenticity when I took it to him.

Redd wouldn't let me take it with me, instead saying he'd mail me the piece when the exhibition was over. I had the distinct feeling he did this so that he could be long gone by the people discovered the pieces they bought were forgeries. Still, I had had no other options for finding artwork, and the museum was in desperate need. I'm going to have to get Blathers to give me some lessons in art, to avoid wasting the city's money.
Posted by Mayor Sakura at 10:03 PM