Beef With a Side of Veggies 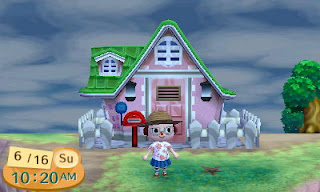 For the first time since moving into town, I had what felt like a slow day. Compared to every other day so far, just not a whole lot happened. Not to say that nothing at all happened, but the scale just felt so much smaller, and I think it's the first time I haven't felt drained to the point of exhaustion.

My house has continued to grow. There's only so many times I can write about trips to Nook's, after all. I now have a room on the western side of my house. The eastern side should be complete in the morning. Can't wait for that one, because my house appears a little lop-sided at the moment. 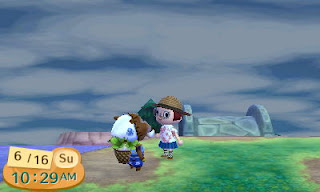 We had another special visitor in town today, Joan the warthog. She visits the town every Sunday morning to sell white turnips. For those not familiar with the Stalk Market (as I wasn't, until she explained it to me), turnips can be purchased on Sundays, and then licensed retailers (Reese at Re-Tail among them), would buy them back during the week. The prices fluctuated daily based on demand and perceived value. Depending on how the trends went, you could make back many times your investment, or lose most of it. The turnips would rot by the morning of the following Sunday, rendering them entirely worthless, so you couldn't wait too long to sell them back into the system. While I wasn't sure how confident I was in this, I figured a small investment could prove an interesting learning experience, and with how much money my house and donations to town projects were eating up, I could use some easy bells. Hopefully I'll at least break even, otherwise I could be finding it hard to eat in the coming weeks. 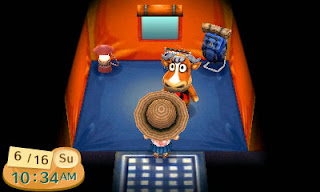 We've also gotten our first camper over in the campsite we had constructed. A bull named Angus was taking a vacation, and had decided that our town was the place for him to do it. We talked for a while, played some games to pass the time. I won a few nifty pieces of furniture off him. He actually mentioned that one of the reasons he was vacationing was to look for a new place to live. After the good time he was having here in Mymeara, it was definitely going on his list of possibilities. I guess only time can really tell if anything will come of that. Still, it's nice to see the investment we had made in the campsite seemed to be paying off. If nothing else, Angus was contributing to the town economy while he was here. 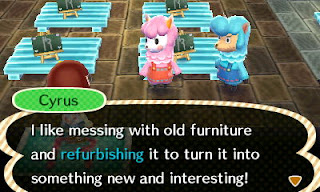 And the last thing of note for the day was that Reese's husband, Cyrus, had finally seemed to fix his sleep schedule, so we were finally able to meet for real. He was a craftsman who specialized in customizing and refurbishing furniture. He also had a few specialties of his own he could make, one of which he demonstrated for me. For three gold nuggets I had found earlier in the week and a modest fee, he started work. A while later, I was the proud owner of a golden wall torch. The thing certainly looked impressive, and had a real Mesoamerican vibe. he said he could create other pieces to match as well, but I'd have to bring him more materials. It was definitely a long-term project, but it seemed like it could be interesting to have an entire room made of gold.

With my rounds around the town complete, I headed into the office. Isabelle and I finally managed to finish the backlog of paperwork. It didn't take long. From now on, we'd both have a lot more free time on our hands. In fact, I was done for the day with half of it still ahead of me. I decided to spend most of it just relaxing at home. It had been way too long since I'd had a day where I could just relax like this.
Posted by Mayor Sakura at 8:08 PM