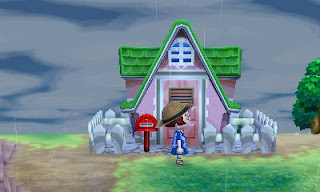 Well, I woke up today to find that my house has a second floor. It's noticeably smaller than the first floor, and depressingly empty, but at least it's there. I may work on turning it into a bedroom. After growing up in my parents' house, it's been hard getting used to my single-room home. Sleeping in the living room has just felt weird. I'll probably move my bed up there later tonight.

The weather was rainy again, but the clouds seemed thin. I doubted it would last for long. In the meantime, it was going to take more than a little rain to keep me from work. I had things to do. 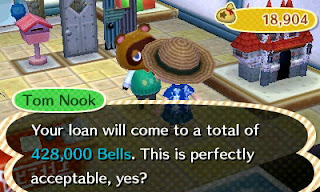 The first thing was to stop by Nook's. I had managed to pay for the addition of the 2nd floor thanks to all the bugs and fish I had been finding recently. Some of these things sold at a real premium. In fact, Nook had been so pleased by all my prompt payments, that he had drawn up a lot of various plans for further expansions to my house. For now, I settled on having a basement installed. I figured the strengthened foundation it offered would help save my investments in the house in case any bad storms ever came through. Maybe I could use it as a storage space once it was done. The price was significantly higher than the 2nd floor had been, but I imagined this stemmed from the simple fact that it was a lot more difficult to build under a house than on top of it. 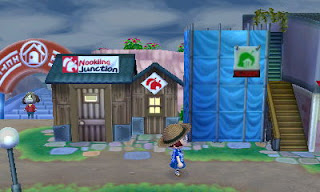 While I was still on Main Street, I decided to look into some shopping, and found a surprise waiting for me. In what used to be the empty alley between Nookling Junction and the Able Sisters' shop, a protective screen had been erected, and the furious sounds of construction could be heard coming from the other side. I vaguely recalled having approved a permit for the construction of a new shop in the masses of paperwork I had been working through, but hadn't expected anything to be happening so soon. Things in Mymeara really did just seem to happen so quickly sometimes, it was hard to keep up. I can't recall any details of what the shop was supposed to be, but I suppose we'll find out when the construction is finished. 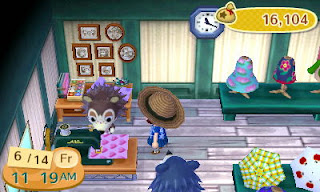 I had been taking time to visit the Able Sisters' shop regularly. I didn't have much in the way of clothing, and kept checking in to see if they had anything that suited me. Sable, the seamstress, finally seemed to be warming up to me. I think today was the first time we had been able to have a real conversation. Sadly, none of the clothes they had available that day really seemed a good match for me. I'd have to keep checking back with them, though I didn't terribly mind. Sable was actually a sweet girl once she opened up a little and started talking. 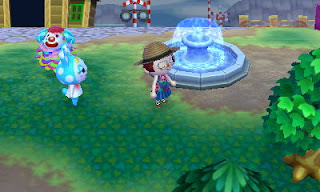 With that done, it was time for today's celebration of the completion of the fountain. I'm honestly a little hard-pressed to think of much to say here, as it played out very similar to previous ceremonies. It was starting to become routine. I had actually considered skipping it, but I think doing that would break Isabelle's heart. I just didn't have it in me to do that to her, given how much effort she was putting into all of these projects. While I was making decisions, she was the one handling all the paperwork, contracting engineers and construction crews ... in fact, I had little to do aside from slap my signature on the forms. She was like a civic force of nature. 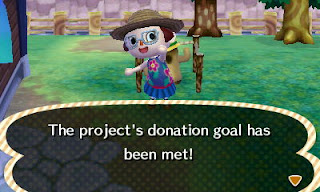 We headed back to the office, and worked our way through the daily dose of paperwork. Looking at the stack, I think we'll be done with it by tomorrow. I'll have to see if I can find a gift for all her hard work. The last order of business was establishing a new project. There was a new one on the list I hadn't seen before, called The Reset Surveillance Center. I honestly had no clue what this was supposed to be, and Isabelle was kind of vague on the subject. She simply told me that it was the base of operations for people who's goal was "to keep people honest". It had been stationed in the town before, but lack of funds had drive it to close, and the center had been demolished by a previous entrepreneur who had eventually given up on his development plans and left. Now that the town was in a more economically viable state, we had the means to resurrect the center.

Despite not really knowing what was in store, the idea seemed really popular with the town's original residents. Most seemed to miss the center, and felt the town was lacking a sense of duty and commitment without its operator. I was hard-pressed to find an excuse to deny them what they wanted, especially since it meant giving someone down on their luck their job back. I approved the measure, and even find the center (which for some reason existed mostly underground) a prominent place next to the town hall. The fund-raising measure that followed was our fastest to date, despite needing significantly more money than any of our previous projects. The townsfolk had clearly spoken on this issue.
Posted by Mayor Sakura at 6:59 PM