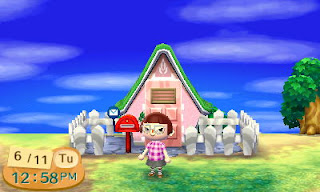 Today, I woke up to find the paint job I had arranged with Nook was complete. I also found two notes from Isabelle on my door. The first said that the application for the development permit had been approved, and that I should come see her when I found the time, to discuss what we could do now that we had the permit. The second said that Tortimer, the town's previous mayor who had retired, was visiting and wanted to speak with me. Figuring Isabelle could wait a bit, I decided to meet with Tortimer first. Maybe he'd have some advice. 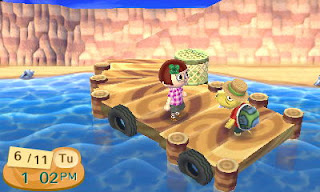 Tortimer was waiting by the abandoned dock at the beach. I had been here a couple days now, and had yet to see any boats there. Even now, there was no boat to be found--Tortimer must have arranged to be dropped off and picked up later.

Tortimer was an affable fellow, full of stories and laughs. His only real advice was for me to relax, let Isabelle do her thing, and try to take things slow. Things only seemed so hectic now because the position had been vacant for so long. Apparently, Tortimer had spent the vast majority of his last years in office napping, and no one complained. So long as the work got done, no one would complain--however much effort I put into things beyond that was up to me.

As I was about to leave, Tortimer had one more thing to tell me. He had arranged for a boat to the tropical island he had retired to to make regular stops here in Mymeara, and invited me to visit any time I felt like I could use a break. The trip wouldn't be free, but he assured me it was worth the cost, as the island was warm and sunny even in the dead of winter. I thanked him for his trouble, and headed up towards main street. 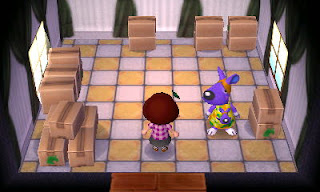 I had planned to go talk to Nook right away, but there was a bit of a surprise along the way--a brand new house had been erected through the night. Inside, the town's newest resident, Sylvia, was unpacking her things. I took the time to introduce myself, but we both had a lot on our plates today. I welcomed her to the town, encouraged her to seek out Isabelle if she had any problems, and decided to take my leave so she could get back to unpacking her things. 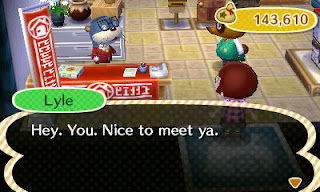 Another surprise awaited me when I reached Nook's office. Honestly, at this point, surprises are hardly surprising. I imagine I won't feel truly surprised again until I experience a day without a surprise. Nook's Homes was now playing host to Lyle, a representative of the Happy Home Academy. They evaluated people's houses and gave them scores on their interior design, along with tips on how to improve things if they wished. Seemed big on Fung Shui, which involved positioning items of certain colors along specific walls, and explained that doing so could improve your luck. Well, I could certainly use some luck--maybe once I had a bit more space, and more furniture, I could look into that. 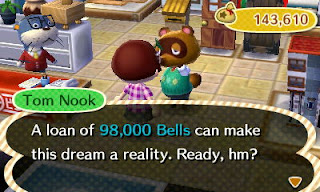 Though that kind of leads nicely to why I had come to Nook's office. My house was nice, but easily the smallest house in the village. I needed some more room to work with, and Nook had suggested I talk to him at any time when I was ready to expand. Well, I felt ready, especially after I had found it so easy to pay off the house in the first place.

The price shocked me a bit. It was nearly double what I had paid for the house in the first place. Nook explained that expanding the house involved getting lots of new permits drawn up, and consumed more materials than the smaller house had, plus the cost of tearing down what was already there to expand it. The details were making my head swim, so I agreed to the loan. It didn't seem like it would take long to pay back, at any rate. As usual, I was assured by an ecstatic Nook that the work would be completed by morning. I had learned not to question the carpentry ninjas. 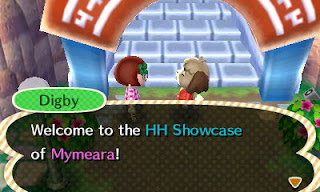 As I was about to head back to the town proper, I was called over by a man who looked like a strangely male version of Isabelle. Turns out I wasn't far off the mark with that thought--it was Isabelle's twin brother, Digby. I vaguely recalled her mentioning a brother, but didn't realize that she had meant a twin.

Digby, like Lyle, also worked for the Happy Home Association, though he managed their Showcase plaza. He explained that they took sample homes from around the world and built replicas for people to draw inspiration from. You could even order furniture and such you liked from their catalogs. He seemed prepare to take me for a tour of what they had available, but I was already running late for meeting Isabelle--maybe another day. 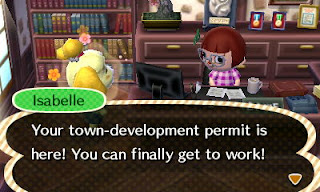 If Isabelle was upset over my late arrival to the office, she didn't show it. She was as bubbly as ever. She seemed super excited for us to be able to get to work on new things now that the development permit had come in.

The first task on our agenda was to enact a town ordinance. There were only so many government-approved options, but a lot of the villagers in town seemed the type who got up and stayed up late. I figured they'd appreciate laws that made it easier for businesses to operate later into the night, so that's what we went with. Many of the town merchants would find it nice as well, she explained, since later at night was when they made most of their money. More legal business hours meant more time for profits.

The next task was setting up a development project. There were things people wanted built in town. We only had the resources to work on one of these projects at a time, so we had to prioritize. And of course, as the mayor, I had the final say in which of these projects were actually built at all. I decided on a new bridge. The river was long, and currently only had one crossing point. It limited mobility through the town pretty drastically. 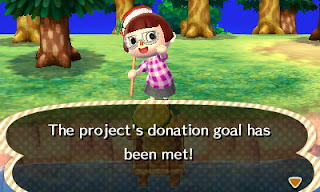 Isabelle went with me to pick a place to build it. I decided the best place seemed to be between the train station and Re-Tail, since the shop saw lots of traffic. With the area marked out, and a donation-accepting gyroid in place, next came actually funding the construction. It was remarkable easy, to be honest. The whole town chipped in some, and before long we had met our goal. The bridge would be complete in the morning. Things in the town seemed to be progressing as a breakneck pace. I wondered if it would ever slow down. 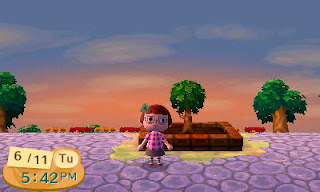 There was only one more thing I felt compelled to do today. Isabelle had asked me to check on the sapling I had planted, to make sure it was doing well. I was getting tired, but a quick trip to the town square wasn't out of the question. The sapling had already grow considerably in just a few days, though perhaps not as fast as most trees in the area grew. It was an unusual breed of tree, but it seemed to be doing well. Secure in the knowledge that I had not murdered a plant, I headed for home.
Posted by Mayor Sakura at 9:05 PM