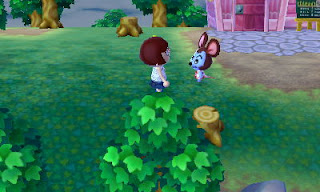 Well, another slow day. Since I don't have much to talk about, I figured I should probably make note of the villagers who lived in the town before I arrived. I've talked about those who moved in after I did, but not much about the ones who came before.

First up is Moose the mouse. Moose is a real musclehead, always talking about working out, eating healthy, and so on. Still, while I've had bad experiences with such types in the past, Moose seems to be a pretty decent guy. While he maybe tries a little too hard to push other people into joining his insane workout regimen, his heart's at least in the right place about it, and he always has a kind word or small gift for people. 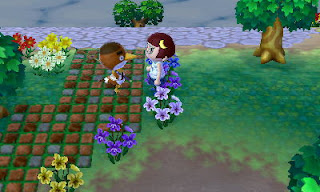 Next up is Anchovy the bird. Anchovy I can relate to pretty well. We both really like video games, and other non-physical hobbies. However, he can be downright lazy sometimes, and forgetful. While I found him heading on his way to the river for some casual fishing, he's never really seemed to have the dedication to reel much of anything in. He likes to pass the time trying, though, even when nothing comes of it. In fact, he's even asked me to help him hunt down specific fish he's been really desperate for in the past. 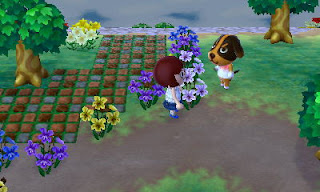 And then we have Butch the dog. Butch can be a handful sometimes. He has trouble getting along well with a lot of the other residents, and tends to justify it as them being too immature for him to tolerate. While he may have a point with some of them, I think he tends to take things a bit too far sometimes, and is just too slow to open up to people. While we've become tentative friends, I'm always a little worried of accidentally making him mad. He really seems to enjoy planting and tending to flowers. I think it's one of the few things that helps him relax. 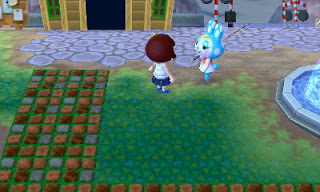 Francine is an odd case for me. I actually didn't like her much when I first moved to town, as she seemed to look down on others and think far too highly of herself. However, over the weeks, we've become rather close friends. While we don't actually have a lot of hobbies in common, we somehow get along and have an easy time talking. Of all the other residents in town, Francine actually lives closest to me, so we meet a lot even by accident. Her habit of gossip can sometimes be annoying, but it also helps me stay up to date on things going on in town. 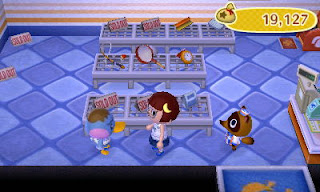 Finally, we have Pate. To be honest, I have a hard time getting along with her. She seems to be off in her own little world sometimes, with delusions of being some kind of superstar. Today, I actually found her out on a shopping trip, where she had seemed to clean T&T Mart nearly entirely out of stock. I'm not quite sure how she was able to afford it, and think that perhaps her parents still support her. Maybe we'll find more common ground one day, as she can be nice when she's not acting like a total loon.
Posted by Mayor Sakura at 3:50 PM