The Bug-Off is On! 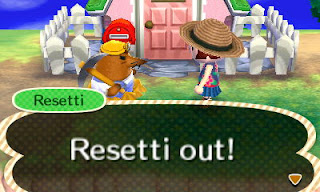 Well, today was quite a day. First thing when I woke up, I was approached by the guy who ran our newly constructed Reset Surveillance Center. To be honest... I still have no clue what he actually does. And he seems to have temper issues. Whatever this ... resetting thing is, I don't want to do it. I have the distinct feeling I never want to be on Mr. Resetti's bad side. Many of the residents seem pleased to have the mole back in town, though, so I'm fine with the situation as long as he doesn't cause any problems.

There were some other additions to the town as well. A new house had gone up, and our town's newest resident was a koala named Alice. I was kind of shocked at how fast people seemed to be moving in. The town was already a lot livelier than it had been when I first arrived, and the pace didn't seem about to slow down any.

The other new addition was on Main Street--the construction I mentioned yesterday was finished, and now stood a cute little shop that specialized in gardening supplies. The owner was a sloth named Lief. He seemed a little too mellow, but he was a nice guy, who really cared about his trade. 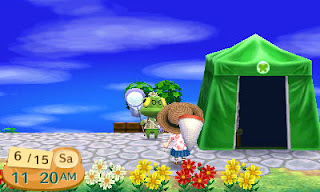 But, in what is probably today's biggest news, the Bug-Off had come to town. A chameleon named Nat had set up a tent in the town square, and was hosting a kind of bug-catching competition. He would judge any bugs brought to him on rarity, size, and the vibrancy of their colors. Any time a new bug took the top slot, he gave away exclusive bug-themed furniture items, and the three top participants would win a special prize at the end of the tournament.

It looked like a lot of fun, and Isabelle urged me to take the day off work and participate. She insisted that taking part in community events like this was important for building my relationship with the other residents of the town. So, heeding her advice (and thankful for an excuse to put off paperwork for the day), I took up my bug net and hit the town.

I have to say, Nat's judgments were harsh. He was able to tell even the minutest differences in size and coloration. Before I had even started, a Spider submitted by Pate the duck had made most of the more common insects useless. I was going to have to work if I wanted to win at this. 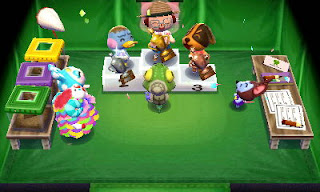 I set my sights on any of the more unusual bugs I could find. I managed to snag quite a few mantises, and some uncommon butterflies, but nothing truly rare. While these were enough to put me in first place, I didn't feel secure in my lead. I decided I'd have to get risky--the danger of the large, aggressive bees that sometimes nested in the trees around town would likely make them a rare sight.

The idea turned into a bit of a double-edged sword. On the one hand, I did catch a few of the bees, and one of them was such a fine specimen that Nat gave it just shy of 100 points. On the other, I wasn't quite fast enough on all the ones I found, and took a stinger to the face. The swelling didn't go down for hours. In the end, I guess it was worth it, because I managed to take first place, and took home a golden trophy. Pate came in second, and Butch the dog came in third.

All that running around town hunting bugs was exhausting. After the ceremony, I told everyone who had gathered goodnight, and headed off to bed.
Posted by Mayor Sakura at 11:50 PM