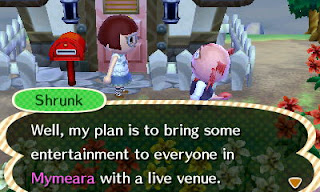 Well, today certainly proved interesting. Not long after I woke up, I heard a knocking on my door, which is actually pretty unusual. Isabelle only leaves notes, and most of my neighbors are familiar with my sleep habits. Turned out to be a guy who called himself Dr. Shrunk. He was a comedian, and was looking to open up a club in the town. Since the noise from such a business could be a concern, he needed not only my own approval, but a petition showing there was enough support by the residents of the town to get the business permit. He figured a respected figure like the mayor would have a better chance of collecting them than a stranger to the town would. He had already approached all the business owners in town, so I'd only really need to approach my neighbors about it. The club sounded like a fantastic opportunity in the town, which was lacking any real venues for entertainment, so I readily agreed. 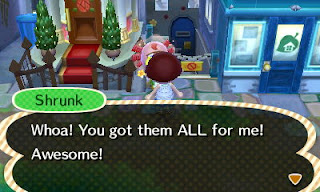 The task actually proved far easier than I imagined. Everyone I approached was as eager for the club as I was myself. While it took a bit of running around to find everyone, I soon had the petition as full as he wanted and then some. Shrunk was waiting for the results on Main Street, where he was planning to open shop. It was actually in a basement, down a small staircase I had never really noticed before. While a little out of the way, being underground would help some with the noise concerns, and I found myself respecting Shrunk's planning, even if the guy seemed a little unusual. If nothing else, he knew the attributes of the business he planned to run.

While I was on Main Street, I decided to check in on that construction project, and much to my delight, it had finally finished. Standing proudly next to The Able Sisters' was the town's brand new shoe store, called Kicks. making my way inside and introducing myself to the owner, I was kind of amused to find his name was also Kicks. It was certainly fitting, given his passion for designing footware.

Sadly, his selection of shoes didn't have much to interest me today, though I did pick up some nice socks. I'll have to keep checking back, because I could definitely use some new shoes. My current ones are getting worn out, having to wear them everywhere. 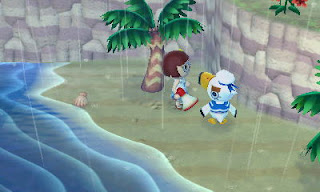 On my way home, some of my neighbors had some... interesting news. A sailor had washed up on shore, and seemed to be unconscious. No one really knew what to do. I wasn't exactly a medical professional or anything, but I had to at least try something. He looked like he was breathing well and such, and was simply asleep. Nudging him a bit only got a few random mumbles, so I decided to try yelling at him through my megaphone. That seemed to do the trick, and he sprang up to attention. His memory seemed foggy. He couldn't recall where he was trying to go, but rambled about a few details. Listening to what he said, talking about vikings and mermaids, I suggested Denmark, as it was the only thing that really seemed to fit. He suddenly perked up and headed off, promising to mail me back a souvenir. I hope I was right about his intended destination.
Posted by Mayor Sakura at 6:21 PM