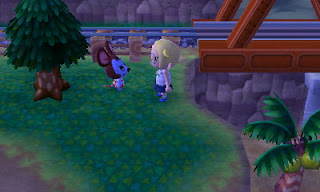 Sadly, I don't have a whole lot to talk about today. But, I'll describe what little of note did happen.

At The Roost, Brewster informed me that business had been going well since it opened, and he'd be offering coffee to go if people wanted. With his shop being so close to Main Street, I imagine it'll lead to a big upturn in his customer base, since not everyone felt like they had time to sit and drink.

I also got word from Moose that he wanted to dig up a time capsule he had buried some time ago, but he had kinda forgotten exactly where. We went hunting, and dug it up near the town's notice board. Seems he had buried a tee-shirt that had gone out of style in the hopes that by the time he dug it up again, it would be back in. He had promptly forgotten what was inside of the thing. So, for my help, he gave me the shirt. 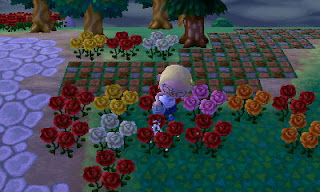 The rest of the day was really an exercise in routine. I did some shopping on Main Street, I spent a bit of the day fishing, and some just browsing the internet. Once the sun was starting to weaken, I decided to go around town and water some of the many flower gardens we had been cultivating around the town, as the increasing summer heat would quickly dry them out without regular care. Watering flowers may not sound like a lot of work, but with the sheer number that we're growing, it actually took a long time. By the time I was done making the rounds, I was beat.
Posted by Mayor Sakura at 5:23 PM