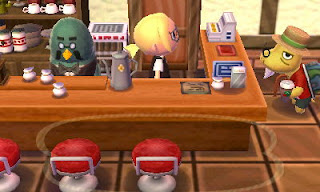 I need to apologize for the lack of updates. I've been bed-ridden with a terrible cold, so haven't been able to get much of anything accomplished in the past couple of days. However, just because the mayor was out of commission doesn't mean the town stopped moving, and I had a lot to catch up on once I was feeling fit enough to do so.

Brewster's business at The Roost has been picking up, to the point where he offered me a part-time job as a barista. My appreciation for his coffee had seemed to assure him I knew a good cup of coffee. I was a little reluctant, still not knowing much about coffee, but he needed the help, and extra money never hurts. 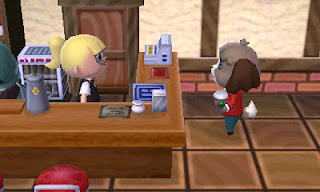 While I had never worked in a coffee shop, I had worked as a waitress for a while, so keeping the customers' orders straight was pretty easy. With a little tutelage from Brewster, I was able to do at least a passable job of satisfying the customers. They seemed to really enjoy the coffee, at any rate. Not sure if it was due to me, or simply the amazing blends that Brewster keeps in stock. Digby came by during a break from his post at the HHA Showcase, and Brewster's coffee was becoming so famous that even Tortimer took the time to visit the town to grab a cup. The stuff must really be something to draw him away from a tropical paradise for a cup of coffee. 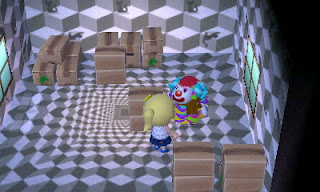 Today was also Pietro's last day in town. He's all packed up, and will be gone in the morning. While I've never particularly liked the guy, I'm glad I was feeling well enough to say goodbye. He was weird, but his presence did help keep the town lively. Hopefully we'll find someone to fill that void soon.

In other news, we've had visits from both Redd and Sierra in the past couple of days, though I was feeling far too ill to have anything to do with either of them. Hopefully I won't be in a similar situation the next time they come to town.
Posted by Mayor Sakura at 11:00 PM